The 61 page report: “Trauma, Turmoil, and Tragedy: understanding the needs of children and youth at risk of suicide and self-harm” was just released this week in British Columbia.  The report was authored by Mary Ellen Turpel-Lafond and confirmed what I have been predicting for years in private conversations.  I’m hoping that the time is right for me to take that conversation public.

Our governments, both federal and provincial, are killing children through neglect.

Turpel-Lafond’s report focused on 89 cases where at-risk children and youth have either completed suicide or caused themselves physical harm by attempting it.  Of those, 58 were in the direct care of the Ministry of Child and Family Development [MCFD] at the time of their suicide or attempted suicide.  MCFD records show that those 58 youth had been moved 776 times while in care and five of them were moved more than 30 times each.

What is truly heartbreaking is that we had programs in place that helped turn these children and youth around and to find them nurturing foster placements.  But the provincial Liberals have systematically eliminated those programs, leaving these at-risk children and youth with virtually no supports.

I played an active role in such programs within the Okanagan valley until the summer of 2010 when MCFD pulled all funding for them, labeling them as “redundant”.  The irony of the label “redundant” is that when they closed 39 therapeutic beds in the Okanagan region, nothing existed to take their place.  So where was the “redundancy”?

The bottom line is that BC had just spent 10 billion dollars on the Olympics and had to pay the bill.  And who did they look to in order to pay it?  The most vulnerable segment of our society - and not only are they marginalized, children and youth don’t vote, so they have no worth to a politician.

The programs that the government chose to close down all had routinely high success rates.  For many of the youth we served, our programs were their last hope.  Society, and sometimes MCFD themselves classified these children and youth as “behaviour” problems and many came to us with an alphabet of diagnoses; ADHD, RAD, ODD, MDD, etc - but once we started working with them, we discovered that under the multiple diagnoses lay past trauma.  The vast majority of those children and youth had experienced abuse and neglect that the average person would not believe.

The agency I worked with would take these youth into our residential programs, work collaboratively with them to help them overcome the traumatic memories, stabilize their lives, then transition them to foster families that were chosen and recruited by us to be a good fit for each individual child or youth.  And the care didn’t end there - their Key Counsellors would work with the youth and the foster family to make sure the transition was as smooth as possible and offer ongoing support to ensure it lasted.  We enlisted the aid of school staff, other community resources, and even the RCMP to help guide these youth toward a better, healthier life.

That MCFD chose to shut down our proven effective therapeutic residential programs came as a shock to both ourselves and to front line Social Workers who knew the value of those programs.  As one Social Worker put it “You guys are golden.”

So the children and youth who these programs served were removed and followed three tracks;


There was one pre-teen youth who needed special care to calm when they became upset, and was doing well in our program when MCFD chose to shut it down.  This youth burned through a couple of foster placements within weeks and was temporarily placed in a hospital psychiatric unit.  Because of pressure from Interior Health, MCFD moved this youth to a juvenile detention facility out of province.  This youth’s crime: Traumatic brain damage from a vehicle accident made it difficult to regulate their emotions.

I predicted in July of 2010 that no action to support these children and youth would take place until they began to die and for the press to take notice.  That is now happening.

Our governments have one priority - to get re-elected.  They don’t care about marginalized people in our society, at least not on a political level.  Early in 2012 I met with MP Dan Albas and had a lengthy conversation about the lack of mental health supports in his riding.  At that meeting I told him that as a mental health practitioner with a private practice I was willing to put my money where my mouth is and offer drastically reduced rates to the families of children and youth who are referred by non-profit agencies such as S.A.D.I., the BC Schizophrenic Society, and the Martin House initiative.  I asked him what he was willing to do.  Albas stated that he was going to look into alternative funding for these non-profit agencies and get back to me.

He never did.  Nor did he reply to my emails after that meeting.

But politicians will respond if their livelihood and future career is threatened.  If you care that hundreds of children and youth are suffering neglect and abuse because of funding cuts in the mental health field, let your MLAs and MPs know.  We’re coming up on a provincial election - let’s get the dialogue started before more children and youth reach the point of such hopelessness that suicide is the only option they can see to make the pain stop. 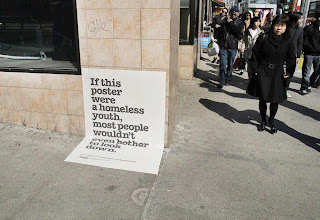