Recently published research indicates that early childhood trauma and trauma that occurs later in life changes the function of our DNA in different ways - more evidence that Post Traumatic Stress is not a “disorder” but is actually an “injury”.

We’ve known for years that early childhood trauma - such as child sexual abuse - causes deep emotional wounds that can last a lifetime if left untreated.  In the past few years, through the use of Functional Magnetic Resonance Imaging [fMRI], we have discovered that post traumatic stress not only changes the brain’s function, but its structure as well, such as causing the hippocampus to shrink, resulting in memory deficits.

But research by Dr. Divya Mehta and Dr Elizabeth Binder of the Max-Planck Institute of Psychiatry in Munich, Germany has discovered how early childhood trauma changes the way DNA is expressed in people who suffered abuse as children compared to those who experience trauma later in life.

“These are some of the most robust findings to date showing that different biological pathways may describe different subtypes of a psychiatric disorder which appear similar at the level of symptoms but may be very different at the level of underlying biology.” said Dr. Kerry Ressler, a researcher at the Emory University School of Medicine.

The study that was just published in the Proceedings of the National Academy of Sciences, is titled the Grady Trauma Project and examined blood samples of 169 individuals that were divided into three groups;

Though all participants with PTSD had similar symptoms - [nightmares; flashbacks; hypervigilance, etc] - those who had experienced early childhood abuse had alterations in their DNA expression that impacted immune regulation and brain development.

“Traumatic events that happen in childhood are embedded in the cells for a long time.” said Binder in a press release, adding; “Not only the disease itself, but the individual’s life experience is important in the biology of PTSD, and this should be reflected in the way we treat these disorders.”

So, what does this mean for therapists who work with those suffering the symptoms of post traumatic stress?

It goes without saying that it is of utmost importance to find the source of the trauma before proceeding with any treatment plan. In addition, the therapist must be cognizant that the traumatic wounds may not only be psychological in nature, but include changes to the structure of the brain and DNA expression.  As therapists, the direct medical treatment of these wounds lay outside of our scope of practice, but that isn’t to say that we can’t help a client who is experiencing post traumatic stress symptoms.

Other research - [by way of fMRI scans] - have shown that combinations of traditional therapy along with having the trauma client learn and practice Mindfulness on a daily basis promotes Neuroplasticity that can reverse the brain injury PTSD has caused.  On the surface, this approach also sees a lessening or elimination of symptoms in these clients.

Dr. Bruce Perry’s Neurosequential Model of Therapy has produced significant results at his Child Trauma Academy in Houston, Texas, working with children who have been impacted by “developmental insults” including early childhood trauma.  This mode of therapy assesses where the “insult” took place in the developing brain and creates therapeutic interventions that stimulate the brain to resume development.

As for reversing the trauma impacts to DNA expression; Further research may very well lead to specific therapeutic interventions that will prove beneficial to our trauma clients. 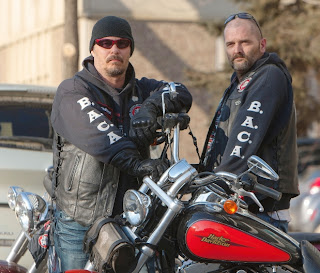 Tap and Mercy are members of the

Photograph by: Gord Waldner , The StarPhoenix


This is a very small blog entry with a link to a very big story ...

I want to bring attention to a group of individuals who at times live on the edge, who sometimes scare the rest of us as they thunder into our towns with their black leather kuttes and three piece patches.  They live in a world the rest of us don't understand - a world of brotherhood whose roots delve deeper than family, and for them, redefine family.

And sometimes they do amazing and inspiring things.

Here's a story about how they are helping to save a generation, one child at a time.

So next time you see a biker, flash him a wave - he just might be one of the "good monsters".